Received a new Gateway (Acer rebadge) model # GWTN141-4. One of the key features was an available m.2 port that is easily accessible via the bottom of the device via 2 simple to remove screws to open the port and then just the 1 screw holding the m.2 drive in place on it's standoff.

Should be easy enough to just pop in a drive and set it up in disk management then right? You would think... I've now tried 2 separate drives initially a Mushkin 250GB and a silicon power 1TB. Neither show up in disk management in Windows. I checked in diskpart. Nothing there either. Device manager doesn't see it... What gives?? Well the laptop comes with no manual and just a single page "getting" started guide that an 8 year old would find useless.

You might think, ah well just go into the BIOS and poke around in there and make sure you can see the drive in there. Well there BIOS is about as useful as a screen door on a submarine. Nearly every option is locked down. Want to disable secure boot? Good luck.

So seeing as the information included with the laptop boils down to how to connect a charger I thought I'd contact their support to see if they had a clue. Their chat support apparently decided to abandon the chat after taking forever to respond several times. Now it won't even load... Did they blacklist me for asking a question they didn't know the answer to?? 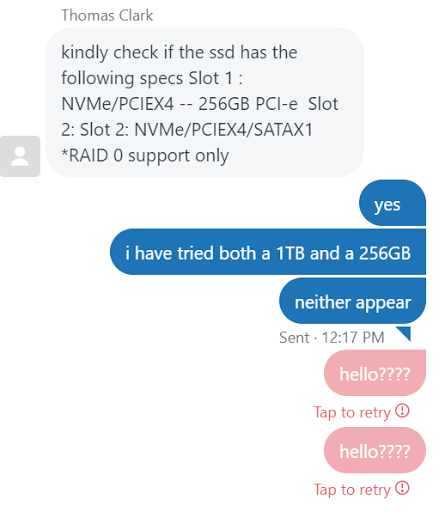 After the wonderful support experience I received online I decided to call in to the support phone number listed and ask what was going on. Fortunately after just a short wait I was greeted by a person with a thick accent and little technical knowledge. I was delighted to learn that I bought the wrong brand SSDs. Good thing they don't actually provide you with their "supported" SSD list literally anywhere. Apparently Gateway "recommends" only 2 specific SSDs whose brand names I could not understand over the phone (pretty sure one is Phison?). I asked them to email me this information and show me where someone would find this out on their own without contacting support. That email has yet to come in.

Given this seems absolutely insane that it would only support these 2 random brands without mentioning that anywhere I asked to speak with a supervisor. I was told I would have to wait for a call back. Wonderful. I'm still waiting for that callback. Will update this with more information as it comes available.

Turns out you can access most of the locked features of the BIOS by setting an administrator password for the BIOS... After unlocking it there is an NVMe configuration section that is accessible. Guess what it shows regardless of either drive being installed? No NVMe device detected. Wonderful. So I'm guessing I got a laptop with a dead NVMe? Who knows. Still nothing from Gateway via email or callback.

While waiting for any response from Gateway I took an m.2 SATA SSD and tried installing it in the m.2 compartment and what do you know? It appeared.... So the connector is keyed m.2 NVMe but appears to only support SATA over m.2.